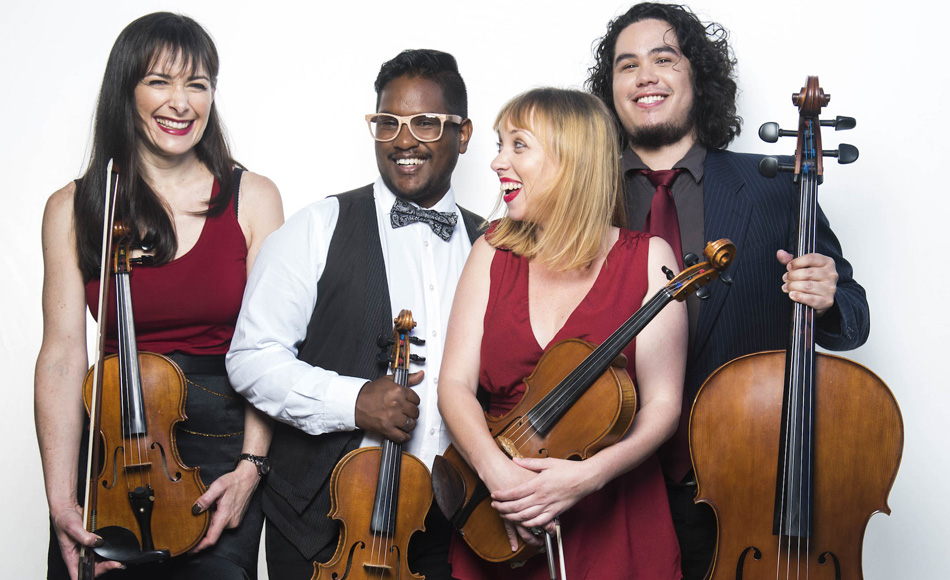 Cinnamon Strings is a Classical String act lead by Rayelle Goodman, who is probably one of Southern Africa’s most versatile violinists. The act is made up of solo, duo, trio and quartet offerings as well as larger orchestra ensembles.

With 30 years’ experience in violin playing, a daringly creative personality and an extensive national and international performance history, her musicianship brings another dimension to any collaboration.

Rayelle was a founding member of both Freshlyground and Coda, dedicating two years to each band. She is also a founding member and the leader of Mac McKenzie’s Cape Town Goema Orchestra (CTGO) and Quintet. Since 2010 they have premiered many South African compositions, over 6 concert seasons. She was proudly part of the bands Adam Speeks with Brendan Adams (2009) and Charles Summerfield’s The URJ (Unlimited Resources of Joy) (2009, 2010 & 2013).

In 2013 she joined the circus show Trash Cabaret. Rayelle enjoys leading strings to accompany various male voice choirs for Cape Town’s annual Cape Malay Choir Competition and the choir festival “aChoired Taste”. In Sept. 2013 she contributed to the SA film “Konfetti” – entire, original soundtrack. In Oct 2013 she composed, arranged and recorded all string parts (and did a music video) for Gian Groen’s acoustic album, “Dekade se Ballades”. She has been collaborating with Novalis Ubuntu Institute in organising & performing in Concerts there. In 2015 Rayelle joined the Irish band, Shenanigans. She has been a member of the Scottish/Celtic group Christine Weir and The Kilts since 2014. She is also a core member of the Afro-Jewish fusion band African Sabbath. In 2015 she performed with local Spanish flamenco cross-over band Duende and formed a jazz/pop duo, Honey, with Lynne Poulsen on keys and vocals.

Cinnamon Strings has been yet another great project started by Rayelle and caters more specifically to Corporate Functions and Weddings. The project is made up of multi-talented classical musicians coordinated by Rayelle and tailored to each client’s brief.